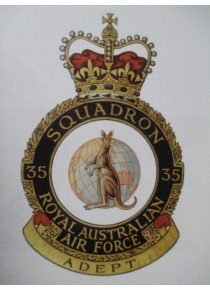 Recollections of Jeff Pedrina pilot No 35 Squadron-‘Wallaby Airlines'. While the story is primarily about the people, and personalities, he encountered during his tour of duty in Vietnam, it is also the story of a remarkable aircraft, the De Havilland Canada DHC-4 Caribou-the first mass-produced short take-off and landing (STOL) aircraft of its size.

This is his story he was there!

If one lived near a RAAF base in the 60's 70's & on & on, you would remember that heavy low pitch drone, you certainly new what was up in the sky and you had plenty of time to see it - she was slow. It was in service for 45 years - amazing!
Wallaby was a Sqn call sign in Vietnam out of the emblem.
A 35th Sqn Caribous was the last RAAF plane to leave Vietnam during the war.
The Sqn has a proud history in air transport which dates back to WW2.