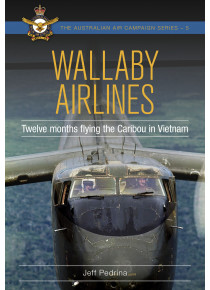 Jeff Pedrina’s book provides a very personal and thoughtful account of his twelve month’s service in Vietnam with No 35 Squadron – ‘Wallaby Airlines’. While the story is primarily about the people, and the personalities, he encountered during his tour of duty in Vietnam, it is also the story of a remarkable aircraft, the de Havilland Canada DHC-4 Caribou – the first mass-produced short take-off and landing (STOL) aircraft of its size. For seven and a half years it was the backbone of the airlift effort in the highlands of Vietnam, and was operated by the Royal Australian Air Force until November 2009, forty-five years after it first entered RAAF service.

First into the theatre in 1964 and last out in 1972, the Caribou aircraft and its air and ground crews were the RAAF’s quiet achievers in Vietnam. In the course of seven and a half years, Wallaby Airlines achieved an excellent operational record and reputation as a tactical transport squadron. This book in its original format was first published in 2006, having been awarded Special Mention in the 2005 RAAF Heritage Awards.

This new edition is intended to bring the experiences of Jeff Pedrina, and the exploits of the Wallaby Airlines and its venerable Caribou aircraft to life for a new generation of reader.

Don't miss out the first edition has been hard to obtain for years.