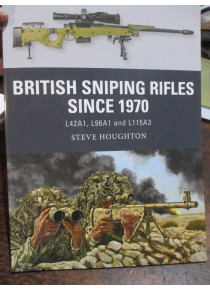 $32.00
British Sniping Rifles Since 1970 - Osprey Books
There seems to be very little published that explains how the British Army arrived at the sniping capability it possesses today, and is in fact half of the historical picture of the British establishment’s love/hate relationship with the role. The last fifty years have seen incredible change, both to the sniping weapon and to the equipment used in connection with sniping. By the mid-1950s the role within the Army had yet again ceased to exist and was paused for almost twenty years with the powers that be believing that the firepower a mechanized army could bring to bear made sniping a redundant role which on a fast-moving battlefield had nothing to offer. This changed when the Soviet Army introduced its gas-operated self-loading Dragunov rifle in the early 1960s. The Soviets had introduced a weapon that, due to its semi-automatic action, was capable of a punishing rate of deadly fire out to 800m and harassing fire out to 1,200m; it was equipped with a state-of-the-art telescope with a ranging reticle that aided the operator.

Of course the British had to respond and show the Soviets that we too could field snipers if need be. The No. 4 (T), which had served so reliably, seemed like a good place to start when it came to reintroducing the role into the ranks of the Army, but a lot had changed since the No. 4 (T) rifle ruled on World War II battlefields. The UK was by this time committed to NATO’s logistical dream of a single shared calibre, the US 7.62×51mm rimless cartridge; if the UK was to embark on a sniper programme of its own, the new weapon was ideally going to use the new rimless ammunition. What on paper seemed quite straightforward would prove to be a knotty problem that Enfield would struggle to solve. The mid-1960s saw the failure of RSAF Enfield’s effort to convert the .303in-calibre No. 4 rifle to 7.62mm; after the programme was abandoned the pursuit of a new sniping rifle was put on hold. As had been the case since 1915, civilian hunters and target shooters had played an influential part in the Army’s sniping endeavours and the British Army’s paused sniping programme would have new life breathed into it by the NRA when it was noticed their competitive shooters were enjoying huge success while using the same World War II-vintage No. 4 action in their competition rifle builds.

The late 1960s saw considerable cooperation between the Army and the NRA. The NRA provided the knowhow, RSAF Enfield carried out the engineering and the Army’s Infantry Trials Development Unit did all of the testing. The L42A1 sniping rifle was to emerge, which looked like nothing the Army had used to date. The rifle had a civilian competition appearance about it, with a heavy free-floating barrel in a cut-down forend unlike any service rifle that had preceded it. The new 7.62mm-calibre L42 sniping rifle was converted directly from .303-calibre No. 4 (T) rifles, each of which still bore the World War II dates and Holland & Holland selection, conversion and completion stamps that told of the rifle’s previous life. The telescope remained the No. 32 Mk 3, but it was recalibrated for the new 7.62mm bullet’s flight trajectory and redesignated the L1A1. The L42A1 rifle received approval for service in August 1970. The rifle was first used by the Royal Marines who – unlike the Army – had never ceased to train and employ snipers and were quick to deploy the rifle to Northern Ireland where it was used initially in a counter-sniper campaign against the IRA.

7 other products in the same category: