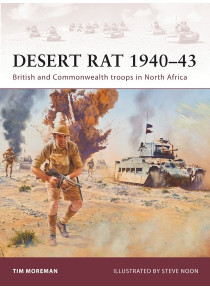 The Desert Rats earned their famous nickname fighting against Axis forces in North Africa. At first the name referred to troops of the 7th Armoured Division, but later expanded to cover all Commonwealth troops- British, Australian, New Zealand and Indian, who fought in the desert from 1940-43.

This book opens with a look at the unique conditions that the Desert Rats encountered in the Western Desert, then examines the recruitment and training of the men, and the evolving fighting methods and training of what eventually became the Eighth Army.

Using photographs and newly commissioned artwork, the book also covers the distinctive dress, equipment and weapons carried into battle by the Desert Rats.﻿