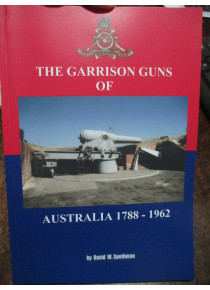 The book has been divided into two parts:

Part I covers the Colonial Period from 1788 to 1901, which is broken down into six sections with the various types of gun grouped into each section.

Part II covers the Commonwealth Period from 1901 to 1962 where all of the guns listed are arranged from the largest down to the smallest calibre.

In the technical data sheet part of the book, where details are known the information has been added, however if the details are not known the relevant space has been left blank.