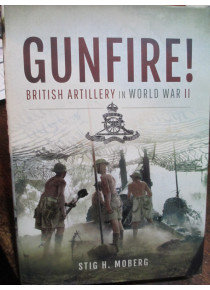 Everything you ever wanted to know about how artillery resources were established, developed and employed during the Second World War, using the British Royal Artillery as an example. Beginning with an overview of the nature and state of readiness of the Royal Artillery on the outbreak of war, the book analyses in great detail the weapons available to the Royal Artillery, their technical functionality and their performance capabilities.

With this knowledge the author then examines the organization, methods, procedures and tactics employed by the Royal Artillery. To complete this fascinating study, Stig Moberg looks at a number of key battles from the war to see how the artillery was used, and the effectiveness of its support to the British and Allied infantry, in campaigns in North Africa, Burma and Europe.

British Artillery of the Second World War is profusely illustrated throughout with photographs, maps, plans, graphs, charts and diagrams to demonstrate precisely how the British Artillery was used on the battlefields around the world.