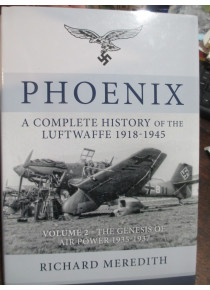 This book is one for the dedicated student of the German WW2 Luftwaffe.

A huge book at 924 pages Volume 2 The Phoenix Matures 1935–1937 covers a still neglected area, namely the early years of post-Reichswehr development from March 1935. During this period the concept of operativer Luftkrieg was formalised, operational commands established, new units and bases created, new equipment introduced and the training of personnel expanded.

Key studies include: the formation of the Flakartillerie, the Luftwaffe General Staff, Luftwaffe uniforms, the construction programme of 1935–39, the development and production of new combat aircraft and weapons, flying training, the Luftwaffen-Reserve, the supply organisation, the development of the Regiment General Goring and the re-militarisation of the Rhineland. In addition the Luftwaffe’s involvement in Spain is considered in depth from initial operations by the German volunteers to the deployment of the Legion Condor in the battles around Madrid and on the Northern Front.﻿