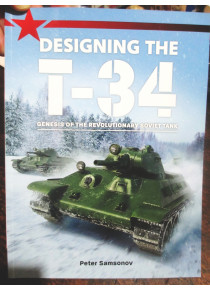 $29.00
Designing the T34 by P Samsonov
When the German army launched Operation Barbarossa - the invasion of the Soviet Union - on June 22, 1941, it was expecting to face and easily defeat outdated and obsolete tanks and for the most part it did, but it also received a nasty shock when it came up against the T-34.

With its powerful gun and sloped armour, the T-34 was more than a match for the best German tanks at that time and the Germans regarded it with awe. German Field Marshal von Kleist, who commanded the latter stages of Barbarossa, called it ‘the finest tank in the world’.

Using original wartime documents author and historian Peter Samsonov, explains how the Soviets came to develop what was arguably the war’s most revolutionary tank design.