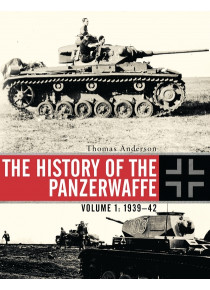 History of the Panzerwaffe Vol1 The Panzer Division by T Anderson

$60.00
The History of the Panzerwaffe Volume 1 The Panzer Division

This technical and operational history is the definitive guide to the legendary Panzerwaffe, from its very infancy to the days when it made Europe its garden path at the height of Nazi German power.

1 Laying the foundation - pre-war establishment
2 The seizure of Czechoslovakia - backing the Panzerwaffe
3 Poland - the ordeal
4 France - at eye level
5 The Balkans - the unwanted campaign
6 Russia - an overmighty opponent?
7 1942 - upgrading the Panzers
8 North Africa - defeat instead of superiority
9 Dark prospects - Waiting for the new tanks
10 Tank recovery and repair 1935-42