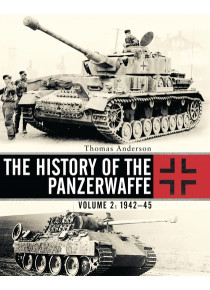 $60.00
History of the Panzerwaffe Vol 2 The Panzer Division by T Anderson
This technical and operational history is the definitive guide to the legendary Panzerwaffe, from its very infancy to the days when it made Europe its garden path at the height of Nazi German power.

1 - Stalingrad - the ‘planned' fiasco
2 - Preparing for Zitadelle - Reorganization of the Panzerwaffe
3 - Kursk - a narrow loss? (special consideration of the new weapon systems)
4 - Overstretched - Sturmgeschütze used to strengthen tank units
5 - The slow loss of Italy - The end of Panzer tactics?
6 - Russia - the weakness of a superior opponent?
7 - Invasion in the West
8 - Collapse - the demise of the Panzerwaffe