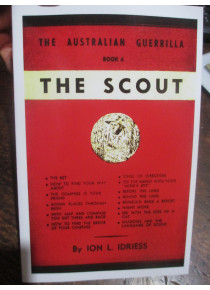 The Scout The Australian Guerrilla Series

$25.00
The Scout The Australian Guerrilla Series By I Idriess

In 1942, during Australia's darkest hour, Idriess was commissioned to write a series of military instruction booklets. The information for the booklets was gained from his WW1 sniper experience and Australian Army doctrine - collectively the books were known as the Guerrila Series.

This is final book in the Idriess Guerrila Series, written in 1942 with the threat of Japanese invasion, full of interest regarding military tactics, and bush survival.