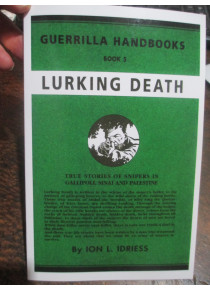 $25.00
LURKING DEATH The Australian Guerrilla Series By I Idriess

In 1942, during Australia's darkest hour, Idriess was commissioned to write a series of military civilian instruction booklets. The information for the booklets was gained from his WW1 sniper experience and Australian Army doctrine - collectively the books were known as the Guerrila Series.

This is book 5 in the Idriess Guerrila Series, written in 1942 with the threat of Japanese invasion, this particular book provides true stories of snipers in Gallipoli Sinai and Palestine.