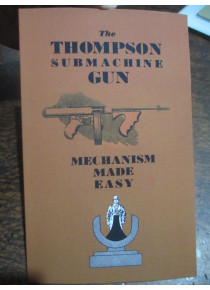 One of a series of Second World War booklets on weapons intended for the training of recruits, this narrative is dedicated to the  military type Thompson .45 calibre submachine gun. This model (M1928) had provisions for box and drum magazines. It had a Cutts compensator, cooling fins on the barrel, employed a delayed blowback action and its charging handle was on the top of the receiver. The booklet describes the correct loading and unloading of the gun; the action of the firing mechanism; the magazines; the action of gases and the cooling system and notes on how to deal with jams and stoppages.

In the Malayan Campaign, the Burma Campaign and the Pacific Theater, Thompsons were used by the British Army, Indian Army, Australian Army infantry and other Commonwealth forces. They used the Thompson extensively in jungle patrols and ambushes, where it was prized for its firepower, though it was criticised for its hefty weight and poor reliability. Difficulties in supply eventually led to its replacement in Australian Army units in 1943 by other submachine guns such as the Owen and Austen, and British forces also largely replaced it with the Sten gun. Thompsons were also given to the Royal Australian Air Force and Royal Australian Navy. New Zealand commando forces initially used Thompsons but switched them for the more reliable, lighter, and more accurate Owen during the Solomon Islands and Guadalcanal campaigns