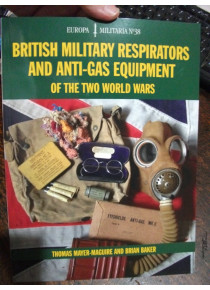 Great book for the re-enactor as it shows the wearing of the uniform with gas masks respirators.

Poison gas was one of the most fearful weapons of its day and added a terrifying new dimension to modern warfare. In 1915, the only item a soldier had to protect himself from the harmful effects of gas was a shell dressing, soaked in his own urine and then tied around his face. By 1918, the British Army had developed a range of innovative protection methods that heralded the birth of the modern day military respirator. Throughout both World Wars, Great Britain led the way in developing anti-gas technologies. Today, items such as respirators and anti-gas equipment are highly sought after by the enthusiast. What the collector lacks is information and reference photographs of such items, and he also has little information available to him on topics such as preservation, manufacturer details and safety aspects of handling these items. This book aims to provide a useful, full-colour reference guide for the discerning collector and for all students of militaria, as well as providing a brief history of the development of gas warfare and equipment.