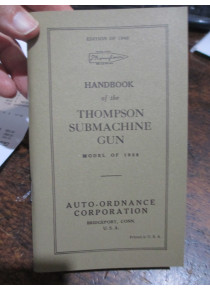 Reprint of the original 1940 Handbook for the Thompson Machine gun.

This gun was used by personnel of the Australian Army in WW2. The Thompson was widely adopted by the U.S. armed forces during World War II, and was also used extensively by other Allied troops during the war. Its main models were designated as the M1928A1, M1 and M1A1 during this time. More than 1.5 million Thompson submachine guns were produced during World War II.