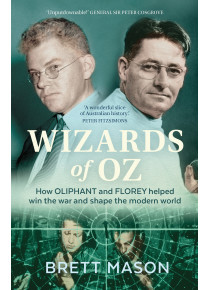 Two Australian scientists, Oliphant and Florey emerge in Wizards of Oz as the two most consequential Australians of the Second World War — perhaps of all time.

Sir Marcus Laurence Elwin Oliphant, AC, KBE, FRS, FAA, FTSE (8 October 1901 – 14 July 2000) was an Australian physicist and humanitarian who played an important role in the first experimental demonstration of nuclear fusion and in the development of nuclear weapons.

Howard Walter Florey, Baron Florey OM FRS FRCP (24 September 1898 – 21 February 1968) was an Australian pharmacologist and pathologist who shared the Nobel Prize in Physiology or Medicine in 1945 with Sir Ernst Chain and Sir Alexander Fleming for his role in the development of penicillin.