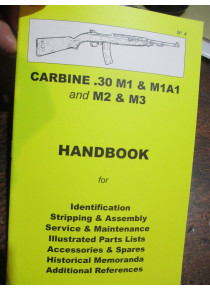 Originally made as a compact in field reference - 34 Pages

The M1 carbine (formally the United States Carbine, Caliber .30, M1) is a lightweight semi-automatic carbine that was a standard firearm for the U.S. military during World War II, the Korean War and the Vietnam War. The M1 carbine was produced in several variants and was widely used by paramilitary and police forces around the world, and also became a popular civilian firearm after World War II.

The M2 carbine is the selective-fire version of the M1 carbine, capable of firing in both semi-automatic and full-automatic. The M3 carbine was an M2 carbine with an active infrared scope system.