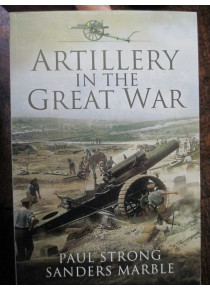 History of Artillery in the Great War WW1 Book

Artillery in the Great War﻿ by P Strong & S Marble

Artillery during World War I, was the most decisive weapon and the greatest killer of men on the battlefield. Although being the most prominent WWI weapon, the history of artillery has very much been neglected. This work shows not only the artillery but also the tactics throughout the long course of the conflict in chronological order. They describe, in vivid detail the theory and methods used by the artillery units of the opposing armies.

"This is a fascinating read, a valuable book, looking at a crucial but neglected aspect of the First World War" - historyofwar.org﻿