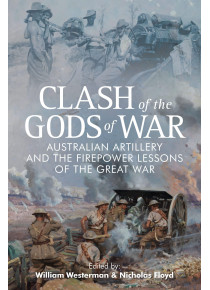 Clash of the Gods of War Australian Artillery and the Firepower Lessons of the Great War by W Westerman, Lieut Colonel N Floyd

"A large military book on a rarely covered topic studing the use, tactics, guns of the Australian Artillery during WW1."

The Great War confronted Australia’s fledgling field and garrison artillery forces with a seemingly insurmountable challenge: to rapidly raise, prepare, deploy and engage in history’s most lethal war to date.

By 1915, the Australian artillery entered into a bloody contest of learning and adaptation against resourceful and resolute opponents, where the stakes would be measured in thousands of soldiers’ lives.

Far from popularly-held views of the Great War as one of stalemate and stagnation, Clash of the Gods of War: Australian Artillery and the Firepower Lessons of the Great War reveals a dynamic and rapidly evolving battle-scape, as artillery planners on each side sought to combine innovative concepts, technology and tactics into victory.

The book draws on an unparalleled array of perspectives on artillery and firepower, presented by Australian and international experts and practitioners over four years during the Firepower: Lessons from the Great War seminar series, commemorating the Centenary of Anzac.

From Anzac Cove to the Hindenburg Line, Clash of the Gods of War tells a gripping Australian story of the Great War through the lens of artillery – the most lethal and influential arm of the war – and considers the legacy that its evolutionary journey holds for warfare today.