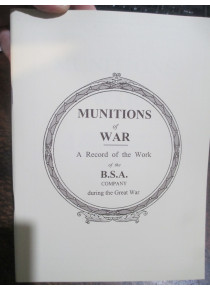 $22.00
Munitions Of War A Record of the Work of the BSA Company During the Great War compiled by G H Frost

During the First World War, the company manufactured arms and greatly expanded its operations. BSA produced the Lee Enfield Rifles, Lewis Machine Guns, artillery shells, bicycles, and motorcycles. Through its subsidiary Daimler, they also made aero engines, aircraft and other vehicles for the war effort as well as machine tools.

Although this book mainly covers the Company's WW1 rifle, Lewis Gun  and munitions manufacture. First printed just after the war, this book is a 1999 reprint.