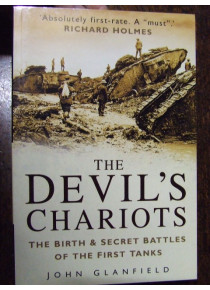 This war book Devil's Chariots , is the history of the birth and development of the Tank in WW1.
Best available account of the overall development of the tank - from the design board to the battlefields of the Great War. Book shows that it was Churchill who drove the project through﻿ dogged opposition from the Army High Command, and how Britain sadly neglected this valuable weapon after the Armistice.
The word tank was originally a codeword covering the top secret development of the world- changing weapon, officially known as the landship.

But, as this eye-opening and readable account of the tank's birth makes clear, it was very nearly stillborn - and had it been up to Britain's blinkered army chiefs, it would have been. The tank had many fathers, but its survival and eventual success was down to the vision and driving energy of one man more than any other : Winston Churchill, Britain's First Lord of the Admiralty earlier in the Great War. Displaying his usual tendency to intervene in affairs beyond his strict jurisdiction, Churchill make the tank project his own - driving forward the weapon in the teeth of all obstacles thrown up by the Army's High Command. When the first tanks lumbered into action on the Somme in September 1916, they took the Germans - who christened them the Devil's chariots' - by surprise. However they were too few in number, and too subject to mechanical failure to turn the tide of war - even when deployed on a large scale at Cambrai in November 1917. As well as retailing the bureaucratic boardroom battles surrounding the tank, author John Glanfield also gives us a graphic idea of the horrors endured on the actual battlefield by the first tank crews. Ironically, Britain sadly neglected its invention - breaking up the design team behind the tank in 1923, and leaving the development of armour to its future enemies. This is a marvellous book, entertaining and enlightening, and the best complete account of the tank's exciting but troubled early years.