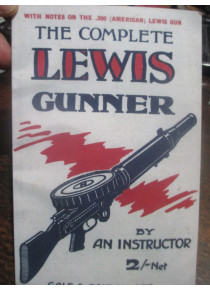 $19.00
The Complete Lewis Gunner by An Instructor - new book

This war book will give valuable insight for family history researchers of Grandfather's daily  'tools of trade' on the Western Front. The Lewis Gunner was a much respected soldier of the AIF in WW1. It was the AIF infantry man's choice of weapons, at 13kg it was light weight compared to the Vickers Heavy Machine Gun. Firing 500-600 rounds per minute there were limitations in the field as the 47 round drum magazines had to be changed. However in many AIF battles the Lewis Gunners saved the day - 1st Battle of Bullecourt was an excellent example.

Surprisingly, it was an American invention.

By the end of World War I over 50,000 Lewis guns had been produced in the US and UK and they were nearly ubiquitous on the Western Front, outnumbering the Vickers Heavy machine gun by a ratio of about 3:1.

The book opens with general instructions on how the gun is loaded, fed, fired, cooled and operated. There are chapters on stripping and assembling the gun, how to cope with stoppages and elementary drill.

Book Condition:
PERFECT - NEW BOOK
Outer Cover on Book:
Soft Cover
Total Pages:
76 pp with illustrations
Publication Date:
2008 reprint of the 1941 manual which was a reprint of the 1918
Weight in grams:
150