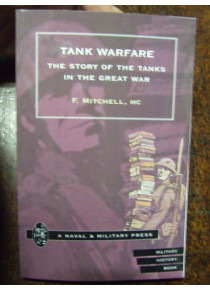 Tank Warfare The Story of Tanks in the Great War

TANK WARFARE. The Story of the Tanks in the Great War by F.Mitchell, MC

Opening a loophole, I looked out. There, some three hundred yards away, a round, squat-looking monster was advancing; behind it came waves of infantry, and farther away to the left and right crawled two more of these armed tortoises. So we had met our rivals at last! For the first time tank was encountering tank! The 6-pounder gunners crouching on the floor, their backs against the engine cover, loaded their guns expectantly.”

The author describes the preliminaries to the first tank v tank battle in history, which took place on 24th April 1918 near Cachy, some 2 miles SW of Villers Bretonneux; for his part in the action he received the immediate award of the MC.

This is just one of the many actions recounted in this book, including that which won the first VC for the new Corps, awarded to Capt C.Robertson in Oct 1917 during Third Ypres. He describes all the tank battles beginning with their first appearance on the Somme in September 1916. But we also see the home front, the training of crews, the technology and the characteristics of the new weapon. There is a brief note on the use of tanks in Egypt, on French and American experiences. The author wrote this book in 1933 so he concludes his book with an analysis of what the tank achieved during the war, descriptions of the post-war armoured vehicles, tanks and others, and his view of tanks in the future. There is a useful glossary of tank terms. ﻿﻿