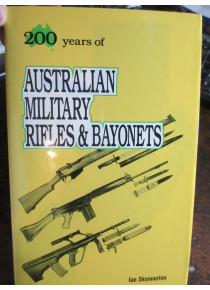 Australian Military Rifles and Bayonets 200 years Of  by I Skennerton

This book is a valuable reference which should be of interest to researchers who wish to know more about  the Rifles and Bayonets use by Australian forces during past 200 years (book publication 1988) .
A highly detailed narrative explains the history, specifications, operation of each the rifles.
Rare expert commentary is included throughout the book.
The narrative is supported by a wealth of photographs depicting each gun bayonet, also included are Lithgow Experimental / Phototype rifles.
A history of the Lithgow Small Arms Factory together with annexes is provided.
In our experience, this book has appeal to family historians wanting to know more about the weapons forebears fought with and of course Arms collectors.

Ian Skinnerton is Australia's foremost historian and acknowledged military gun expert. His books and advice are sought after throughout the world especially by Gun Collectors.
This is your chance to obtain his well known and highly regarded books.
Limited Stock - avoid crying once stock is sold - buy now...

The more famous rifles included but not limited to are;