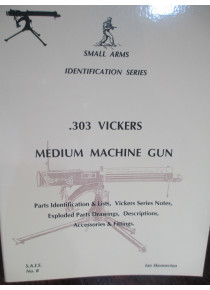 .303 Vickers Medium Machine Gun was introduced in 1912 and continued to be made up to 1945.
One of history's most reliable guns. Used by Australian Forces in both World War One and Two. A large reserve of 4500 Vickers were held by the Australian Army right up to the 1980's.﻿

This is your chance to obtain his well known and highly regarded books. ﻿