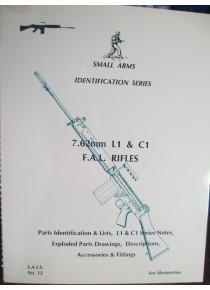 7.62mm NATO British, Australian & Canadian inch-system FN FAL (Fusil Automatique Léger) rifles and accessories described and compared, with armourers drawings. The South African metric R1 and Indian 7.62mm 1A FAL rifle equivalents are also brought into this authoritative comparison. This rifle was introduced to the Australian Army from 1959. The variant L1A1 Self-Loading Rifle, also known as the SLR (Self-Loading Rifle), was standard issue for Australian Army from 1959 to 1988. Being used by Australians during the Malayan Emergency Indonesian Confrontation Vietnam War.

Ian Skennerton is Australia's foremost historian and acknowledged military gun expert. His books and advice are sought after throughout the world especially by arm collectors.