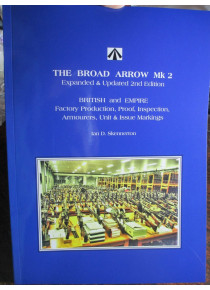 A new book to the Skennerton Collection

Ian Skennerton has revisited the MoD Pattern Room England - the world's largest working collection of reference military small arms. Together with this collection in hand and his outstanding knowledge, he has come up with this amazing book. This is the expanded and updated 2nd Edition to the extremely collectable 1st edition Broad Arrow which was released in 2001 (long time out of print). This book records, explains and defines the British and Empire (Australia, Canada, New Zealand, India, South Africa included) service markings found on rifles, pistols, muskets, edged weapons, bayonets and associated military items for example unit markings commonly found on medals.

This is a most comprehensive reference, listing factory production, proof, inspection, armourers, unit, makers and issue marks on a weapon - if the weapon was made in the British or Empire (up to 1980's) great chance the mark will be defined in this book.

As Ian says, "Enjoy the Knowledge"