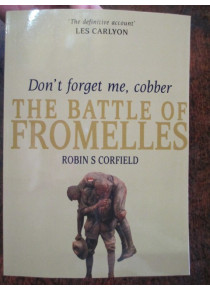 If you want an Australian book about the Battle of Fromelles this is the BEST - without any doubt. This 2009 printed edition has an extra 20+ pages which includes a prologue by Lambis Englezos, hindsight passage by Robin Corfield and discussion about the Lost Diggers of Fromelles Pheasant wood cemetery .

Robin S. Corfield (1929-2010) was a highly regarded military historian who has written many books about battalion histories. These included Hold Hard Cobbers: The Story of the 57th and 60th Australian Army Infantry Battalion 2 Volumes, and Never Forget Australia: Australia and Villers Bretonneux 1912-1990.

Corfield began his research for this book back in the early 1990’s, when the Battle of Fromelles was not well known. In 1993,Robin Corfield together with Jackie Todd and Lambis Englezos established the Friends of the 15th Brigade. In July 2000 Robin Corfield, self published this book the first history to be written on the Battle Of Fromelles. Lambis followed up on several references in Robin’s book, which led to his successful, search for “the missing diggers “ from the battle. Author Les Carlyon described this book as the “definitive history” of the battle.

On 19 July 1916, near the northern French Flanders village of Fromelles, Australia   suffered its worst-ever military defeat when our diggers were ordered to go over the top and attack the German lines. Eight hours later, more than 5500 Diggers lay dead or wounded (1,917 were killed): the equivalent of all Australian casualties from the Boer, Korean and Vietnam Wars combined. In addition, some 400 of our boys were taken prisoner. Running messages and dodging bullets behind German lines was a 27-year-old Austrian corporal named Adolf Hitler. The battle left its mark on him: Fromelles was the first place he returned to in 1940 when the German Army marched back into France.

Fromelles ranks as Australia’s worst ever disaster, yet it barely rated a mention in our history books. Why did our generals collude with the British government to cover up the catastrophe? Corfield answers this and many other questions which have haunted the history of the Battle.

Recently, the Battle of Fromelles has received prominence due to the efforts of Robin Corfield, Lambis Englezos, a French mayor and a cast of amateur sleuths who initiated the successful search for the missing buried diggers.