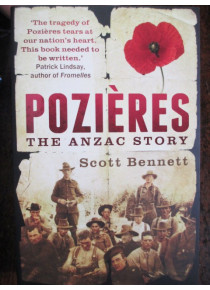 On the 23 July 1916, 1000's of soldiers of the Australian 1st Division﻿ attacked German trenches at Pozières. The Battle lasted 45 days before the Australian Army forces were relieved, having suffered 23,000 casualties to gain a few miles. Despite the toll, the operation was heralded as a stunning victory. Yet for the exhausted survivors, the war-weary public back home in Australia, and the families of the dead and maimed, victory came at a terrible cost.

The author who had family who took part in the Battle visited the Battlefield in 2003. He become committed to writing a history of the courage, life and times of those who took part in the Battle. Drawing on the letters and diaries of the men who fought at Pozières, this superb book reveals a battlefield drenched in chaos and fear. Bennett sheds light on the story behind the official history, re-creating the experiences of those men who fought in one of the largest and most devastating battles of the Great War and returned home, all too often, as shattered men.

‘This is a staggeringly good first book; as good a piece of military history as I’ve read in a long time … There is a humanity in this book that is moving and deeply involving.’

‘Bennett … has deftly reconstructed the battles through a variety of accounts from historians and participants. One of Bennett’s many strengths is his ability to transport himself and the reader into the shoes of the different protagonists, elucidating the battle from a variety of perspectives.’

‘Pozières has languished in Gallipoli’s shadow for almost a century. Scott Bennett shines a probing light into that darkness. His passion is evident in every page, and his attention to detail is striking … The tragedy of Pozières tears at our nation’s heart. This a book that needed to be written.’