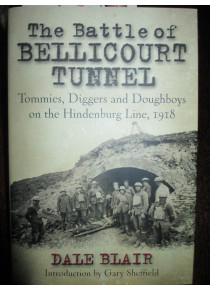 This book is a concise record of the Battle of Bellicourt Tunnel which in Australia is generally covered under the Battle of Saint Quentin﻿ Canal.

During September 1918 as part of the general advance towards the German Hindenburg Line a series of victorious battles were fought by British, Australian and American forces.﻿

The battle was fought for the outposts of the Hindenburg Line close to the village of Bellicourt.﻿ The Americans suffered high losses, but generally the ﻿attack failed  to achieve its set objectives and it took the Australians three days of bitter fighting to reach theirs.﻿