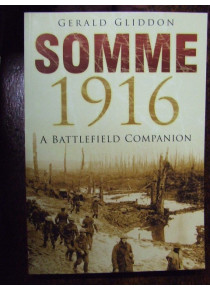 Battle of the SOMME 1916 A Battlefield Companion

This military book about the Somme was printed 2009 ' SOMME 1916 A Battlefield Companion ' By G. Gliddon. The author is a leading Battlefield historian, you may already know his other books detailing 1st World War topics such as Victoria Cross recipients and Battlefield War Memorials. In the long history of the British Army, the Battle of the Somme is its bloodiest encounter. Between 1st July and November 1916, 432 000 of its soldiers became casualties - about 3,600 for every day of battle.

Australia's major contribution of troops to the Somme offensive was in the fighting around Pozières between 23 July and 3 September. The 1st, 2nd and 4th Australian Divisions suffered more than 24,000 casualties at Pozières, including 6,741 dead. Official war correspondent C.E.W. Bean described the small village as “more densely sown with Australian sacrifice than any other place on earth”.

Gerald Gliddon's classic survey of the Somme battlefield in 1916, first published in 1987 to great acclaim, has been greatly expanded and updated to include the latest research and analysis. Supported by a wider selection of archive photographs and drawing on the testimony of those who took part. This new edition covers all the famous battle sites such as High Wood, Mouquet Farm, Pozieres, Mametz Wood and also the lesser known villages on the outlying flanks. The author provides thumbnail biographies of all the senior officers to fall, as well as the winners of the Victoria Cross and those who were ‘shot at dawn'. Somme 1916 is essential reading for anyone interested in the First World War and visiting the Battlefield. It includes a day to day account of the British build-up and the ensuring struggle, British and German orders of Battle and full history of cemeteries annd memorials both 'lost' and current, that sprang up in the years following the war.