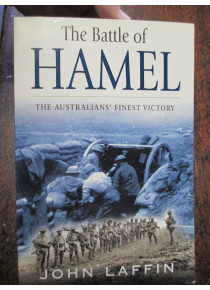 The History of The Battle of Hamel by John Laffin

Battle of Hamel The Australians' Finest Victory ' by John Laffin

In May 1918, Lt General Sir John Monash took command of the Australian Imperial Force. It was a momentous occasion because the whole of the AIF had longed to be together under their own senior commander. Only three weeks after Monash took control he put forward a plan for the capture of the German front line centred on the French village of Hamel.

Using 7000 Australian troops, fewer than 3000 of them frontline soldiers and some newly arrived Americans , Monash planned for a 90minute Battle. Monash succeeded in capturing Hamel on 4th July 1918 the battle lasted just 93 minutes.

An amazingly brief period. Monash's success greatly affected the military thinking of the Allied High Command. Hamel was the turning point of the war. From that point the Australians with their Canadian comrades, launched on the 8 August 1918 the Battle of Amiens the great offensive that was to bring the war to a victorious end. Dr Laffin was one of the world's most distinguished military historians and more than 60 of his many books concern war. fully indexed for easy research. There is one chapter dedicated to comparing the disaster of Fromelles to the success of Hamel.
At no other time, in Australia's history, have we had such a great impact on world affairs than at the end of World War One. This was partly due to the genius of Monash but was earned by the magnificence of the AIF.