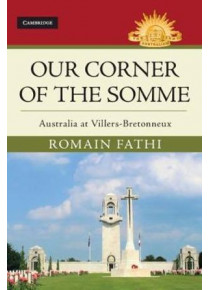 Our Corner of the Somme Australia at Villers Bretonneux Fathi

Our Corner of the Somme Australia at Villers-Bretonneux By R. Fathi

The author Romain Fathi, is a lecturer in Australian History at Flinders University and  associate Center d'Histoire de Sciences Paris France.
The first chapter of the book questions the relevance of Villers Bretonneux battles within the greater history of World War I and then the importance of those Villers Bretonneux battles as being the 'Turning point of the war'.

The book historically follows the postwar friendship that has developed between Villers Bretonneax and Australia over the years with the construction of the Australian National Memorial and later Museum.﻿

As a result, it holds a significant place in Australian history. Villers-Bretonneux has since become an open-air memorial to Australia's participation in the First World War. Successive Australian governments have valourised the Australian engagement, contributing to an evolving Anzac narrative that has become entrenched in Australia's national identity.

Our Corner of the Somme provides an eye-opening analysis of the memorialisation of Australia's role on the Western Front and the Anzac mythology that so heavily contributes to Australians' understanding of themselves﻿.