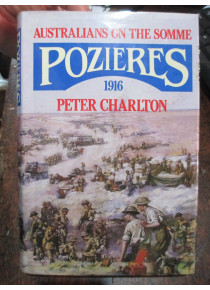 Australians on the Somme - Pozieres 1916

Australians on the Somme - Pozieres 1916﻿ by P. Charlton - used book

The author published this military war book on Pozieres in 1986 and it has become a sought after book on the Battle of Pozieres . Charlton describes the fighting at Pozieres, the strategic military genesis and the tactical blunders during the Battle.

Pozières, a small village in the Somme valley in France, was the scene of bitter and costly fighting for the 1st, 2nd and 4th Australian Divisions in mid 1916.

The village was captured initially by the 1st Division on 23 July 1916. The division clung to its gains despite almost continuous artillery fire and repeated German counter-attacks but suffered heavily. By the time it was relieved on 27 July it had suffered 5,285 casualties.

The 2nd Division took over from the 1st and mounted two further attacks - the first, on 29 July, was a costly failure; the second, on 2 August, resulted in the seizure of further German positions beyond the village. Again, the Australians suffered heavily from retaliatory bombardments. They were relieved on 6 August, having suffered 6,848 casualties.

The 4th Division was next into the line at Pozières. It too endured a massive artillery bombardment, said to be the most intensive ever endured by an Australian force. Pozieres became the ‘standard’which judged shellfire intensity within the AIF. On the morning of the 7th August they defeated a German counter-attack  this was the last attempt by the Germans to retake Pozières. This was the attack that Albert Jacka VC distinguished himself.
Pozieres - The cost for Australia – 23000 casualties…
Lest We Forget