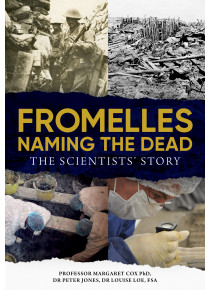 In 2009, the bodies of these 250 soldiers were excavated by Oxford Archaeology. Among them were the Wilson brothers who, with their comrades were subsequently reburied in individual marked graves in the new cemetery in Fromelles village.

The Battle of Fromelles needs no introduction, nor do the losses sustained. Here we focus on 166 of the 250 soldiers who were excavated from six mass graves adjacent to Pheasant Wood in 2009 and who have since been identified. Each has his own story to tell as does his family. We explore aspects of these lost lives while telling the story of their recovery and identification.

This is the story of how these lost soldiers were excavated and identified. It is told by the scientists who led the excavation, the anthropological and DNA analyses, and the identification process. It is their story of involvement with and commitment to this fascinating project, in which many combined decades of professional experience were pooled to help achieve a fitting final resting place, names restored, for these brave men, and belated solace for their families.