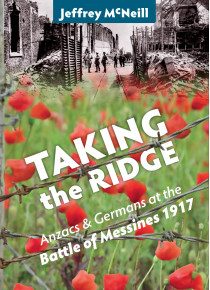 Taking the Ridge Anzacs & Germans at the Battle of Messines 1917

$75.00
Taking the Ridge: Anzacs & Germans at the Battle of Messines 1917 by Dr Jeffrey McNeill

This book is being sold direct from New Zealand by the author - postage is extra.

The 1917 Battle of Messines was the most complete British military victory of the First World War and one in which a fifth of all New Zealand’s soldiers who served overseas would have somehow participated.

Taking the Ridge tells the story of these men, together with those of the Australian 3rd and 4th Divisions and 25th Division that fought alongside them. It also tells for the first time the story of the Germans directly facing these soldiers in a battle they were to recognise as one of their darkest days of the war.

More than a century on from the battle, it is appropriate for New Zealanders and Australians to rediscover this largely forgotten victory and understand the part their troops played in it.


‘I have just finished Taking the Ridge. Where do I start? I think you have done what many authors hope - to produce the definitive work on a subject, to the point there is really nothing left to write. The thoroughness with which you have dealt with the Battle of Messines is astonishing, and I hope you feel the last 10-15 years have actually been worthwhile, book production-wise. I particularly like the way you included the German side of the battle and you have taken extraordinary steps to research and explain this’ – Neil.


‘I've only dived into the book very briefly, but I really like the balance between the Allied account and the German point of view. I've always felt that most accounts of the battle rely too one-sidedly on the allied narrative. But I've also found it difficult to find an account from the German side’ – Graham.

‘I have “rifled” through it to pick out areas of particular interest and I will read with relish. To say I am impressed is truly a gross understatement…I must say I was relieved at the damming assessment of Godley…I am appreciating all the detail which is emerging and getting much satisfaction from my improved understanding’ – Margaret.