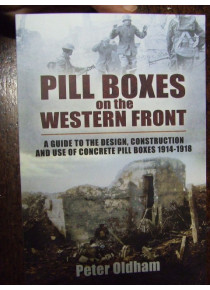 Pillboxes on the Western Front by Peter Oldham - new book

This military book is a specialized study of Pill Box Concrete defences and their lethal use as machine gun bases during WW1.

A guide to the design, construction and use of concrete pill boxes 1914-1918.

When the First World War froze into a static line of trenches stretching from the North Sea to the Swiss border, the most obvious means of protection against the murderous machine-gun fire which both sides inflicted upon each other was some form of shell-proof shelter which from which fire could be returned in safety, hence the development of the pill box.

He describes how the innumerable difficulties involved in what might to the untrained eye seem to be a fairly simple structure, were gradually overcome. Containing as it does, a gazetteer of the remaining pill boxes and bunkers still to be found in Flanders and Picardy, this book will prove an invaluable guide to the members of many clubs and societies which annually make pilgrimages to the battlefields of the First World War and certainly add a new dimension and interest to their visits to the Western Front.﻿