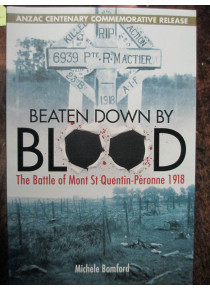 Beaten Down by Blood: The Battle of Mont St Quentin-Peronne 1918 by M. Bomford.﻿
new book

This Australian WW1 book titled, " Beaten Down by Blood: The Battle of Mont St Quentin-Peronne 1918" by M. Bomford is a concise history of the Battles fought for Mont St Quentin - Peronne in 1918.﻿﻿

The Battle of Mont St Quentin is regarded as one of the finest achievements of the AIF. Monash was the master planner of the operation. He had just received accolades for the Battle of Amiens including a rare Knighthood in the field by King George V.

Elements of 2nd Australian Division namely the 17th Battalion and 20th Battalion crossed the Somme River on the night of 31 August, and attacked Mont St Quentin at 5 am, from the unexpected position of northwest. It was a difficult position as it was an uphill fight for the troops, across very open ground where they were vulnerable to attack from the German-held heights above. ﻿This book charts an extraordinary journey from the trenches facing Mont St Quentin on 31 August 1918 through the frenetic phases of the battle until the final objectives are taken on 5 September.

This is the story, often told in the words of the men themselves, of the capture of the ‘unattackable’ Mont and the ‘invincible’ fortress town of Péronne, two of the great feats of Australian forces in the First World War.

Through meticulous research, the Author locates real men on the battlefield, describing their fears and their courage and their often violent deaths.﻿The struggle for control of the battle, to site the guns, to bridge the Somme and maintain communications are portrayed in vivid detail. The story also offers a glimpse of the men’s families at home, their anxiety and their life-long grief.

This work provides a carefully articulated context, describing the ground over which the battle was fought and examining the corps and the ingredients which made it ‘socially and structurally homogenous’. An overview of infantry firepower, tactics, training and discipline demonstrates that there was more to the Australian soldier than daring and dash. Likewise, the Australians’ German opponent, while numerically weaker and haphazardly thrown into the line, is portrayed as a worthy adversary—a determined and tenacious opponent.

Beaten Down by Blood explores the relationship between myth and history and the significance of the Anzac legend. It analyses the forces that drove the diggers forward even when they had reached the limits of their endurance.

The Battle of Mont St Quentin-Péronne represents the Australian Corps at its very best, its diggers fighting for peace and satisfied that, ‘whatever might lie ahead, at least everything was right behind them’. At the time, the success of these Battles brought high esteem for the AIF.
The Australian Commander General Monash in 1920 wrote of these victories in his book, The Australian Victories in France in 1918﻿. We thank Monash and the AIF for this achievement -may their memory not be forgotten.﻿
LEST WE FORGET

AGreat companion for this book are

Men of Mont St Quentin or

The Battle of Mont St Quentin-Peronne 1918 by Michele Bomford﻿