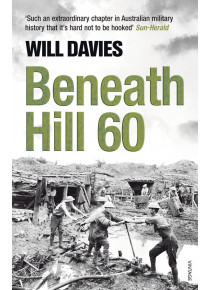 Beneath Hill 60 by Will Davies - new book

This is the book of the respected movie of the same name BENEATH HILL 60 click here to see or buy the DVD of this movie .

On 7th June 1917, nineteen massive mines exploded beneath Messines Ridge near Ypres. The largest man-made explosion in history up until that point shattered the landscape and smashed open the German lines. Ten thousand German soldiers died.
Two of the mines - at Hill 60 and the Caterpillar - were fired by men of the 1st Australian Tunnelling Company, comprising miners and engineers rather than parade-ground soldiers. Drawing on the diaries of one of the key combatants, Benealth Hill 60 tells the little-known, devastatingly brutal true story of this subterranean war waged beneath the Western Front - a stygian battle-ground where men drowned in viscous chalk, suffocated in the blue gray clay, choked on poisonous air or died in the darkness, caught up up in vicious hand-to-hand fighting...﻿