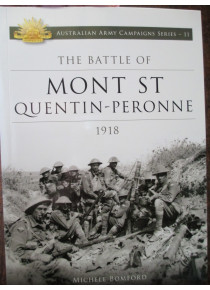 The Battle of Mont St Quentin-Peronne 1918 by Michele Bomford

This war book, Battle of Mont St Quentin-Peronne 1918 charts an extraordinary journey from the trenches facing Mont St Quentin on 31 August 1918 through the frenetic phases of the battle until the final objectives are taken on 5 September. This is the story, often told in the words of the men themselves, of the capture of the ‘unattackable’ Mont and the ‘invincible’ fortress town of Péronne, two of the great feats of Australian forces in the First World War.

This work provides a carefully articulated context, describing the ground over which the battle was fought and examining the corps and the ingredients which made it ‘socially and structurally homogenous’. An overview of infantry firepower, tactics, training and discipline demonstrates that there was more to the Australian soldier than daring and dash. Likewise, the Australians’ German opponent, while numerically weaker and haphazardly thrown into the line, is portrayed as a worthy adversary —a determined and tenacious opponent.

The Battle of Mont St Quentin-Peronne 1918 explores the relationship between myth and history and the significance of the Anzac legend. It analyses the forces that drove the diggers forward even when they had reached the limits of their endurance. The Battle of Mont St Quentin-Péronne represents the Australian Corps at its very best, its diggers fighting for peace and satisfied that, ‘whatever might lie ahead, at least everything was right behind them’.