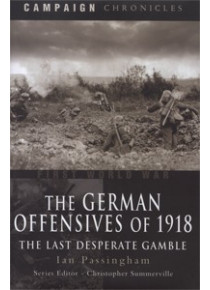 GERMAN OFFENSIVES OF 1918 The Last Desperate Gamble﻿ by Ian Passingham﻿

GERMAN OFFENSIVES OF 1918 The Last Desperate Gamble '
by Ian Passingham. Few pivotal years in history are less understood than that
of 1918. It was a momentous period, which began with Germany's desperate gamble
to win the Great War through a sequence of spring offensives on the Western
Front. Ian Passingham's graphic study draws on a wide range of original German,
British and French sources, and it features previously unpublished eyewitness
accounts and photographs. He boldly reassesses German military doctrine, the
strategic thinking behind the offensives and the effectiveness of the stormtroop
tactics used. He also considers how the poor state of German military morale
and the privations and unrest of the German people contributed to the army's defeat..Australian Infantry was crucial in bringing the German Offensives to an end especially the 9th/15th Brigade at Villers-Bretonneux. The famous ANZAC Day Counter attack undertaken by Pompey Elliot.