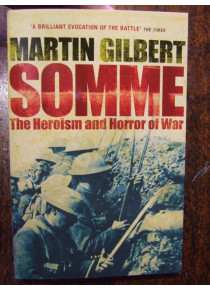 SOMME The Heroism & Horror of War by Gilbert incl Pozieres

The Somme Herosim and Horror in the First World War by M. Gilbert : new book

“Gilbert has unearthed fascinating details of the campaign . . . An unforgettable read.”—The Philadelphia Inquirer
At 7:30 a.m. on July 1, 1916, the first Allied soldiers climbed out of their trenches along the Somme River in France and charged into no-man’s-land, toward the barbed wire and machine guns at the German front lines. In the months that followed, the fifteen-mile-long territory erupted into the epicenter of the Great War, marking a pivotal moment in both the war and military history as tanks first appeared on the battlefield and air war emerged as a devastating and decisive factor in battle. All told, there were more than one million casualties, with 310,000 men dead in just 138 days.
In this war book gives a vivid account of one of history’s most destructive battles, distinguished historian Martin Gilbert tracks the experiences of foot soldiers, generals, and everyone in between. With new photographs, journal entries, original maps, and military planning documents, The Somme is the most authoritative and affecting account of this bloody turning point in the Great War.