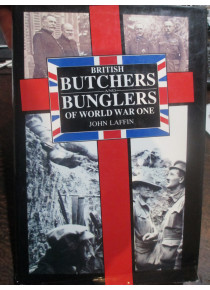 Laffin, a well known Australian Military historian & writer, was a 2/AIF Kokoda veteran, he died in 2002. Laffin's Father and Mother both served in World War One AIF. So from an young age, Laffin knew of 1st AIF Digger Stories and knew of their mental scars.

In this book he makes a detailed analysis of the leadership of the British Generals of WW1. Laffin asks how those responsible for catastrophic defeats were able to retain their commands. Laffin holds Haig responsible, after all Haig was Commander in Chief who lost 60,000 casualties on the first day of the Somme, he also investigates in detail Townshend, Haking and Gough and focuses on the battles at Gallipoli , Somme , Passchendaele Cambrai and Mont St Quentin ( Laffin considered this Battle the finest of WW1 undertaken by Monash ). Butchers and Bunglers represents Laffin’s indictment of these commanders – and of 10 Generals in particular. It's important reading, because it collects together a huge weight of evidence and assertion against Haig . He asks some important questions and provides answers to tropics which are hard for current generations to understand such as : Why didn’t the general public, press, religious or political pundits of the day complain or mass demonstrate about the massive casualties? Why did the Generals persist, in one battle after another, with methods of attack long after they had been proved ineffective?

Laffin wrote this book after years of searching the battlefields of the Western Front, collecting the memories and statements of those who lived and suffered through it all.
This book has always been controversial and this is Laffin's attack against the wholesale slaughter of British and Empire troops. Great book from one of Australia's greatest military authors.

Laffin's books have become sought after and are highly collectable. Here is a prediction that his books will not become any cheaper into the future especially with the centenary of World War One fast approaching....