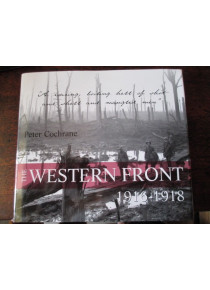 This war book is a substantial photographic record of life and death at the WW1 Front. Not all the photographs were taken by official war photographers. At the time, Kodak was marketing a pocket camera for soldiers. Although it was against military orders, many soldiers smuggled camera & film out of the battle zone - with the rage of Battle taking place it was easy to take a few photos for 'back home'.

They were a new kind of macabre tourist, keen to capture something of their experiences. The result is a powerful visual record of Anzacs at the Western Front.

Using these photos, The Western Front looks at the major battles of the campaign, the grim conditions endured by the soldiers, the workers of the massive support system, the heroic efforts of stretcher-bearers and medical workers and, finally, the run of victories under Monash in which Australian soldiers distinguished themselves beyond their numerical presence.
The book also matches the diggers own words of the battle with the photograph - superb presentation.
Of the 60 000 Australians who died in the course of World War One, 45 000 were lost at the Western Front. ﻿