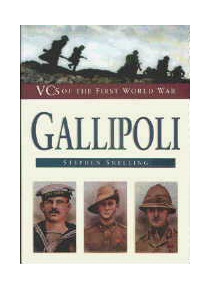 The landings on the Gallipoli Peninsula on 25 April 1915 represented the greatest amphibious operation carried out during the course of the First World War. What had initially been a purely naval enterprise had escalated to become a full-scale Anglo-French invasion, resulting in an eight-month campaign which Churchill hoped would knock Turkey out of the war. For a campaign that promised so much, it ultimately became a tragedy of lost opportunities. By January 1916, when the last men were taken off the peninsula, the casualties totaled 205,000. This book tells the stories of the thirty-nine men from the Commonwealth and Empire armies whose bravery on the battlefield was rewarded by the Victoria Cross - the highest military honour - among them the war's first Australian VC, first New Zealand VC and first Royal Marine VC. Although the total is far smaller than the number awarded on the Western Front, it represents the highest number of VCs won in any other theatre of war. Thirteen went to the 'incomparable 29th', who carried out the main landing on 25 April. Six were awarded to a single battalion: the 'six VCs before breakfast' won by the 1st Lancashire Fusiliers. Not only do we learn of the heroic endeavours of these men at the height of the battle, but we also read of their lives before the war, and the impact the awards had on their subsequent careers. Albert Jacka became a hero in his native Australia and the exploits of 'Dick' Doughty Wylie and the submariner Martin Nasmith acquired legendary status in the hands of the popular press. Many were successful, but the lives of several others ended in tragedy. The accounts of those awarded the VC, gleaned from diaries, letters and contemporary reports written by the recipients or eyewitnesses, most of which are previously unpublished, are arranged chronologically, so offering a new perspective on the course of the campaign. The book is also richly illustrated with over a hundred paintings, photographs and sketches.