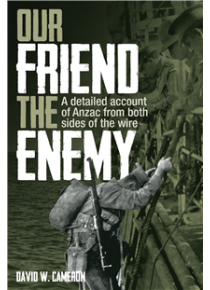 Our Friend the Enemy A detailed account of Anzac from both sides of the wire by David W. Cameron

On 25 April 1915 Australian troops landed on the shores of the Gallipoli Peninsula, racing up the rocky slopes towards First Ridge and into the annals of military history. Just after noon the New Zealanders joined in, fighting off numerous determined Turkish counter-attacks. The Anzac legend of courage and endurance in the face of adversity was born. But the failure to push on during the first critical hours of the battle set the course for a protracted and costly stalemate.In August a major offensive was launched to break free of the beachhead prison, seize the high ground north of Anzac and strike the Dardanelles side of the peninsula. It was a spectacular failure and, by October, evacuation was in the air. The courageous and stubborn resistance of the Turkish foe had won out.
Our Friend the Enemy provides a view from both sides of the wire and described in first-hand accounts. Australian Captain Herbert Layh recounted that as they approached the beach on 25 April that, once we were behind cover the Turks turned their ... [fire] on us, and gave us a lively 10 minutes. A poor chap next to me was hit three times. He begged me to shoot him, but luckily for him a fourth bullet got him and put him out of his pain. Later that day, Sergeant Charles Saunders, a New Zealand engineer, described his first taste of battle, The Turks were entrenched some 50-100 yards from the edge of the face of the gully and their machine guns swept the edges. Line after line of our men went up, some lines didn’t take two paces over the crest when down they went to a man and on came another line. Gunner Recep Trudal of the Turkish 27th Regiment wrote of the fierce Turkish counter-attack on 19 May designed to push the Anzac’s back into the sea, It started at morning prayer call time, and then it went on and on, never stopped. You know there was no break for eating or anything ... Attack was our command. That was what the Pasha said. Once he says “Attack”, you attack, and you either die or you survive.
The Gallipoli campaign involved a mix of nationalities that went beyond the Anzacs and Turks to include German officers, and British and Indian troops. These are the people whose words tell this story — the courage and heroism, the monotony and often humour that accompanied the horrors of the bitter fight to claim the peninsula.