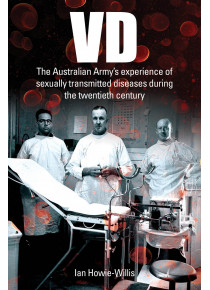 VD and the Australian Army

Covers all 20th Century Wars but there is a greater record of World War One and WW2. There are chapters on BCOF in Japan, Korea and Malaya, Vietnam and 1976 - 2000 deployments.﻿

Sexually transmitted diseases, for centuries lumped together as ‘Venereal Disease﻿’, or ‘VD’ for short, have always marched in lockstep with soldiers from all armies wherever they have served.

During the twentieth century at least 125,000 Australian soldiers contracted VD while serving in overseas deployments — the equivalent of six World War I infantry divisions.

Until the advent of penicillin in the mid-1940s, the two most common and most devastating sexually transmitted diseases were gonorrhoea and syphilis. During the overseas deployments of the Australian Army during the twentieth century, these two debilitating, disfiguring, embarrassing and potentially lethal
diseases put tens of thousands of soldiers out of action for weeks at a time.

Gonorrhoea and syphilis weakened the Australian Army, seriously reducing its operational capability. These two diseases also incurred huge financial costs for Australian citizens, whose taxes went into recruiting and training whole cohorts of new troops to replace those hospitalised by VD and effectively lost to the Army for months on end. In addition, sexually transmitted diseases imposed enormous strain on the Army’s usually overstretched health services. Essentially preventable and self-inflicted, they diverted resources that could otherwise have been devoted to treating and rehabilitating soldiers wounded in action.