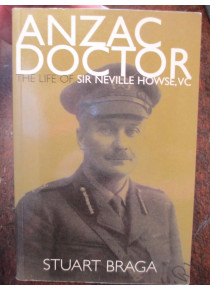 Anzac Doctor: VC The Life of Sir Neville Howse, VC
Howse was a member of the New South Wales Army Medical Corps. He was awarded the Victoria Cross for heroism in a battle which took place during the Boer war. To this day he remains the only Australian medical officer to have received the VC.
At the start of﻿ WW1 he enlisted in 1914 and was a senior medical officer as Anzac Cove. By the end of World War I he was the Director of Medical Services for the whole of the AIF. Having being knighted 3 times for his services. Upon his return to Australia he entered Federal﻿ Parliament in 1922 and was a successful Minister holding several portfolios including Defence, Health, and Repatriation is now known as veterans affairs.
He died in 1930.﻿