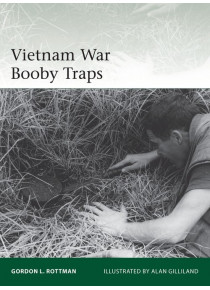 During the Vietnam War, the Viet Cong were frequently unable to hold their own in stand-up fights against US and allied forces who were superior in strength, firepower, mobility, and logistics.

They relied instead on traditional guerrilla warfare tactics including small-scale hit- and-run attacks, ambushes, terrorist actions, and precision attacks against bases. These included one of the oldest of guerrilla weapons the boobytrap.﻿

This osprey book identifies the various traps used and workings. Although methods like the use of punji stakes pre-dated the Vietnam War, many Vietnamese traps showed the ingenuity of the enemy to be very clever in devising﻿ such devices. ﻿

1 other product in the same category: