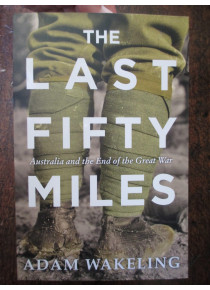 This military book documents the last battles of WW1 in which the Australians fought. The books title refers to the distance over which these battles were fought in France.

Australia played one of the critical roles of its entire history with the AIF's decisive victories during the later part of World War I.

The vivid descriptions of the author includes the iconic Battles of Hamel, Amiens, Villers Bretonneux, Mont Saint Quentin, Hindenburg Line and Montbrehain.
Referencing the master strategy of the Australian commander General Monash.﻿ Retrospectively, this was a sad time for the men of the AIF as many mates who had fought valiantly throughout the war since Gallipoli were being killed. ﻿